It’s Spring Break time around here and we have tongue-in-cheek discussions of “Let’s Party!”  There is only one person I can think of that has truly honed his skills at creating a raging party through song and performance and that is Andrew Fetterly Wilkes-Krier, but you can call him Andrew W.K.  How dedicated to the party is Andrew.  This is the cover of his debut album “I Get Wet” 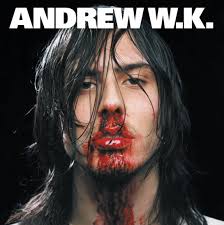 This album contains such party inspiring songs as “It’s Time To Party”, “Fun Night” and “Party Til You Puke”.  Here’s Andrew performing the hit song “Party Hard” on SNL.   You gotta admit the music is so raucous and infectious that you can’t help but join in.  Check out those dance moves!

Here’s “I Want To See You Go Wild”

Strangely enough this man is more than a party monster.  He’s also a motivational speaker.  In fact, The New York Times did a feature article on his lectures to Universities throughout the country, including Yale.  According to Wikipedia and not surprisingly “Each event began with Andrew improvising on the piano alone on a stage before they frequently evolved into giant parties, with most of the audience dancing on stage with Andrew”

Posted in music | Tagged as: Andrew W.K. | Leave a comment