I think of a better way to spend a part of your 3 day weekend at The Hollywood Bowl with Fleetwood Mac.   Sure, it’s without Christine McVie so you won’t hear “Over My Head” or “Say You Love Me” or “Little Lies” or “You Make Lovin’ Fun” but they’ll still play “Don’t Stop” (how could they not?).  However, Lindsay Buckingham is still one of the finest guitarists out there and mix in the still bewitching Stevie Nicks and the devilish drumming of Mick Fleetwood with the stoic, yet solid bass of John McVie and you’ve got quite a night.  Of course it won’t be like vintage Fleetwood Mac.  Here’s one of my favorite clips from 1978 of a possibly coked up Stevie singing and dancing to Bob Welch’s “Ebony Eyes”. 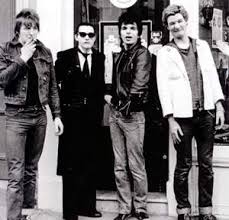 Perhaps you were one of the few that did not buy Rumors.  If so, you might be more interested in The Damned at The El Rey.  Their first album came out the same year Rumors came out.  “New Rose” still sounds as vibrant and urgent as the day it was recorded.   It was described by critic Ned Raggett as a “deathless anthem of nuclear-strength romantic angst”.  That description would have fit a number of songs on Rumors.  The song just has a faster tempo than “Go Your Own Way”

Posted in music | Tagged as: Fleetwood Mac, The Damned | Leave a comment